The blonde whirlwind was born in Hanover and seemed to want to conquer the world from then on. Already at the age of thirteen Maricel wrote her first song, was soon dis­co­vered by pro­ducers and got a record deal with her first single “Still waiting”. She couldn’t be dis­tracted from her path, which led her to the Bremer Musi­cal­theater, where she took over the first line-up of the ‘Lucy’ in “JEKYLL & HYDE”. This was fol­lowed in the New Flora in Hamburg by the German pre­miere of “MOZART!” with Maricel as the first cast of ‘Con­stanze’ and the first cast of ‘Amneris’ in Disney and Elton John-Musical “AIDA” in the Colosseum in Essen. 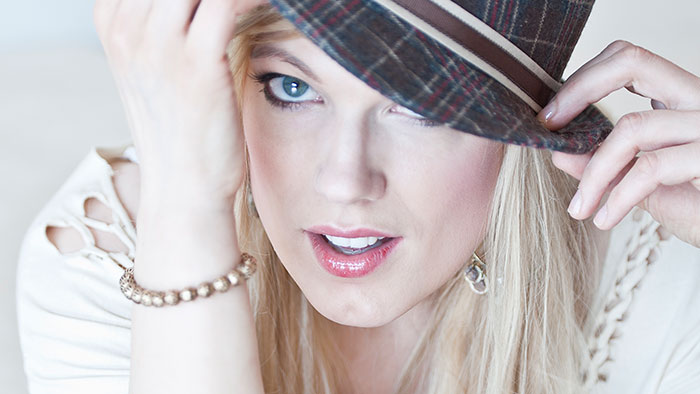 “THE LITTLE HORRORLADEN” in Chemnitz Maricel had as ‘Audrey’,   and then she floated as an enchanting ‘Christmas Angel’ in Charles Dickens “FROM THE SPIRIT OF CHRISTMAS” through the Schil­ler­theater in Berlin. In the Sym­phonic-Rock-Musical “DER RING” at the opera house in Bonn she let the golden ring of power fall into the wrong hands as a Rhine daughter ‘Ten­derness’ , after that she plunged into France of the 18th century for 6 months and revived it in Bremen “MARIE ANTOINETTE” again.

For the spe­cially com­posed suc­cessful tour pro­duc­tions of the children’s musicals “DER KLEINE ZAHLENTEUFEL” and Lan­gen­scheidts “DIE HEXE HUCKLA” -Maricel changed to the director’s chair. New chal­lenges in Baden near Vienna and Regensburg as ‘Maria’ in the “WEST SIDE STORY” and in numerous other leading roles fol­lowed.

The diversity of the artist is shown in her pro­duc­tions: “Scary Musical Night“and “KonzART”, in which she also presents her own pain­tings and deli­ber­ately leaves the 08/15 path. At the beginning of 2016 there was the pre­miere of the “Unf­or­gettable” show concert, in which Maricel and her col­leagues pre­sented hits and ever­greens from many areas of music in their own version.

Humorous and quick-witted, she leads through the pro­gramme and interacts with the audience in a very special way. In a broad spectrum from rock/pop to gospel and soul to soulful ballads and clas­sical arias, Maricel’s voice gives you goose bumps.